The Consulate of the Republic of Lithuania for Apulia and Basilicata regions, headed by the Consul, Dr. Giuseppe Saracino (H.C.), for years has been committed to promoting various initiatives in order to sponsor our regions in the Baltics and vice versa. 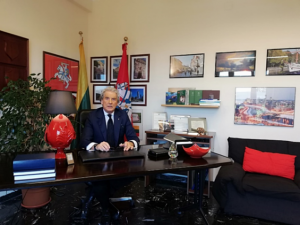 In the last five years, in fact, the Consular Touristic Section, has always launched propulsive actions at a commercial, touristic and cultural level; and recently it seems that the situation is unblocking: most of the Apulian citizens are receiving the second dose of the anti-Covid vaccine and consequently are applying for the Green Pass.

Furthermore, in the Republic of Lithuania, tourists from Countries in the Orange (Yellow) and Green zone, that have tested negative for the Covid-19 test, can visit the Country without obligation of self-isolation on arrival; while visitors from the same zones, who have completed the course of vaccination or who are cured, are not required to undergo the test.

Taking advantage of this assumptions, many Apulian citizens, as well as Lithuanians, are organizing their holidays abroad. In the last two months, in fact, and especially in May, several delegations of Lithuanian Tourists – members of the Rotary International of Kaunas and of the Lions of Vilnius – have arrived in Puglia and Basilicata to visit and get to know one of the most beautiful areas of our region: “the Lower Salento”.

The delegates, who stayed in Gallipoli, were hosted by one of the most famous local family, the General

Director of the Caroli Hotels, Dr. Attilio Caroli Caputo and his wife, Dr. Monica Moretto, in two of the five structure present in the area: the Joli Park Hotel, and the Ecoresort Le Sirenè. Here the tourists, had the opportunity to take part in a fashion show organized by the Caroli Family – Dr. Gintare Kelbauskiene and Dr. Monica Slaboseviciute (both dentists) lent themselves to parade as models for the occasion – to promote our region also abroad.

The Consulate of the Republic of Lithuania, as well as the Honorary Consul, Dr. Giuseppe Saracino, with the constant technical and international support of the Avv. Cav. Nancy Dell’Olio, sponsor our territory in the Baltic Republics and vice versa.

As known, the Avv. Cav. Dell’Olio, holds the position of Ambassador of Puglia in the World with considerable success especially in the cultural and touristic fields. Moreover, in 2014, she was also invested as Dame Of 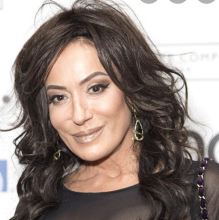 Merit for the Republic of Italy by the President of The Republic, (“this title refers to the first of the National Orders and is intended to “reward merits acquired towards the nation in the field of letters, arts, economics and in the disengagement of public offices and activities carried out for social, philanthropic and humanitarian purposes, as well as for long and reported services in civilian and military careers”).

Recently, also thanks to the increase in the vaccination campaign and the growing demand for the Green Pass, they are advising those who want to visit and get to know the Republic of Lithuania, taking advantage of compatriots who have lived there permanently for years.

One of the strenghts for the promulgation of similar actions are certainly the links between Italy and the Republic of Lithuania, which thanks to the constant intervention of the Consulate, give many tourists the possibility to easily reach the Baltic Countries.

It’s the case of the direct flight Bari-Vilnius, which remained active until 2018; or the direct flight Napoli-Kaunas; and again, thanks to the Consul Saracino, the implementation of a similar direct flight Brindisi- Bergamo/Malpensa taking advantage of good connections from Bergamo to Vilnius, as well as Brindisi- Rome ( Fiumicino or Ciampino airport) / Rome-Vilnius. 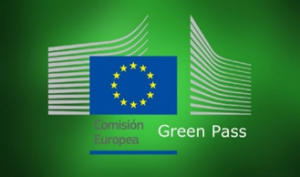 In the behalf of these actions, in recent months, several delegations of Italian tourists have exploited these connections in order to reach the Republic of Lithuania and spend there from 5 to 7 days in the name of exploring the territory – the delegation deals with some local Tour Operators and members of the Rotary Club of Lecce. The Historic Center of Lecce, as known, of Baroque imprint  reminds the Old Town in Vilnius, characterized by a very pleasant Baltic Baroque style, which is the reason why, in recent years, the Diplomatic-consular headquarters of the Republic of Lithuania, has formalized some twinning, including: the Historic Center of Lecce with the Historic Center of Vilnius, the Rotary Club of Lecce with the Rotary Club of Vilnius and still the Lions International of Copertino with the Lions International of Vilnius, as well as the Salento Cultural Institute with the corresponding Cultural Institute in Vilnius. 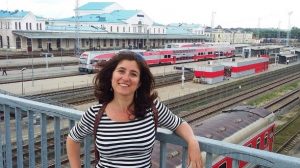 To welcome them on arrival in the Republic of Lithuania,  Dr. Ludovica Federzoli, graduated in Conservation of Cultural Heritage in Vilnius, who has lived there for 10 years. She works there as a tour leader and licensed tour guide of Lithuania, as a freelancer, with touristic agencies, private groups, public and cultural institutions. Moreover, Dr. Federzoli, has a wide knowledge of the Lithuanian territory accompanied by a great passion for the Country, so that her enthusiasm has not diminished over the years but, on the contrary, it has grown more and more, permeating her works and the touristic services she offers. Therefore, she promotes specific trips to Lithuania, aimed at discovering the Country itself enhancing it in its entirety.

Dr. Federzoli, with the constant support of the Honorary Consul of the Republic of Lithuania for Apulia and Basilicata regions, Dr. Giuseppe Saracino, accompanied the delegation on a tour of the Republic of Lithuania for a few days. The first stop was Vilnius, the Country’s capital, and in particular its famous University. It was founded by King Stephen I Báthory in 1579 and represents the oldest University in Lithuania. The prestigious institution still preserves the oldest and richest library in the Country and from a recent study conducted by the Cultural Section of the Consulate of Puglia and Basilicata of the Republic of Lithuania, it emerged that Father Salpa, an Italian Jesuit native of Martina Franca (province of Taranto), had long held the position of Rector of the University.

In the evening, Dr, Federzoli, lead the group to one of the most iconic pizzerias of the place: Maurizio’s. This traditional pizzeria, on one of the busy streets of the Old Town of the city, features a range of cozy premises and a spacious stylish summer terrace overlooking the city attractions. The group, here, had the opportunity to watch the work of the professional pizzaiolo over a classic Italian stove. In addition to the typical Italian pizza, the guests were able to savor a typical Italian dessert too, the so called Tiramisù. 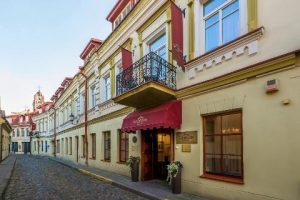 During the visit, the southern Italian group was hosted by two particularly well-known structures in the Capital: the Grotthuss Hotel and the Amberton Cathedral Square Hotel. The younger tourists undoubtedly preferred the latter closer to the new city, home to numerous clubs and pubs excellent for enjoying the Lithuanian nightlife. The hotel is located in the very heart of Lithuania with a magnificent view of the Cathedral Square, and is provided of several types of rooms, from standard to high-class and  of apartments too, so that anyone will find the right one for any specific needs. Here, the younger group has the opportunity  to experience the attractions of the city. For example “Amberton Spaces”, which is a workspace in the heart of the city, on Cathedral Square, designed to create, or moving around the city riding ecological electric GoGreen scooters for free too.

The former group,instead, stayed at the Grotthuss Hotel, decorated in the Classical Vilnius Old Town style, with original bricks arcs and stuck ceiling, mixed to the elegant Classic Italian style furniture which together to the Lithuanian art makes the hotel unique. Here, the delegation, was welcome to enjoy a relaxing session in the sauna, and after that visited the garden nearby the structure immersed in the green in a breathtaking atmosphere. 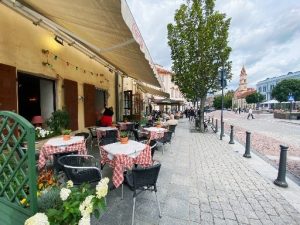 In the following evenings, before moving to Kaunas, the group of Italian tourists, constantly accompanied by the professionalism and competence of Dr. Federzoli, went to dinner at two of the most renowned Italian restaurants in Vilnius: “Fiorentino” and “Antonio”. The former, is located in the heart of the old town of Vilnius, between the Presidential Palace and the historic seat of the University, and here the group appreciated most the combination of traditional Tuscan dishes with a large selection of wines.At the latter, furnished from the flooring to the furnishings, with every single element that contributes to give the environment a contemporary yet classic style, the guests tasted authentic Italian dishes: from appetizers to risottos, from pasta dishes to soups, from meat to fish dishes and still many side dishes and desserts. The last two stops of the visit of the Italian delegation in Lithuania, have been Kaunas, which is the second largest Town in number of inhabitants, as well as the main industrial center in Lithuania, and which was chosen to be the European Capital of Culture in 2022, and Anykščiai, a city ​​that boasts a decent ski resort and is famous both nationally and European for being an attractive tourist destination. In Kaunas, the Italian group stayed in 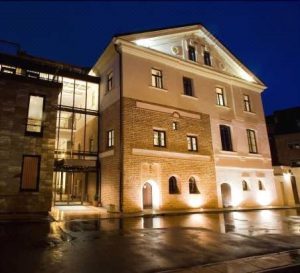 the Daugirdas Hotel, located in the Historical Center of the city, in a restored 16th – 19th century building, at the confluence of the largest Lithuanian rivers. The structure has a restaurant composed of four rooms in frescoed Gothic cellars.  In the room named “L’Artisan”, the guests attended wine tastings, themed parties and barbecue parties organized on a terrace.While, in Anykščiai, the guests were hosted in the Spa Vilnius Hotel, which is the first modern wellness center and SPA treatments in Anykščiai and also houses a 4-star hotel as well as the SPA Center with a mineral water pool, a children’s pool and various wellness and beauty treatments that the guests have enjoyed. Furthermore, the center host a restaurant in which the Italian group have appreciated fresh and gourmet dishes.  The Italian group of tourists and in particular the local Tour Operators and the members of the Rotary Club of Lecce, particularly appreciated the privacy and tranquility of  Anykščiai. In fact, a twinning with the aforementioned Club is recently in progress; also thanks to the interest of Mindaugas Lucka and his wife Karina. Mindaugas Lucka is Vice President of the Lithuanian community of Puglia and Basilicata, and with his wife, they now live permanently in the Gargano and are very committed to promoting Puglia in Northern Europe. 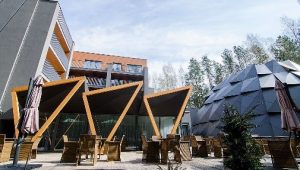 As we have previously reported, the delegation greatly appreciated the journey undertaken, being particularly fascinated by the richness and beauty of the Republic of Lithuania. We also renew the absolute willingness on the part of the Consular Section – as indeed happened in previous years – and of the Tour Guide, Dr. Ludovica Federzoli to organize any tourist trips such as this one held in Lithuania in order to get this beautiful small Country known in the rest of our territory.