Starting next Spring, Puglia and Lithuania will be connected again. It will be possible to reach Puglia, coming from Lithuania and vice versa, by the air connections operated thanks to Ryanair Airlines, as early as next March 2021, via Milan (BGY) to Vilnius. For further information concerning these new flights, please, contact directly the Official Web Site of Ryanair Airlines (www.ryanair.com).

“The new flights will contribute to increasing international tourism to the benefit of the related Apulian sector – comments the Consul of Lithuania for Puglia and Basilicata (also important as far as concerns Tourism itself) GIUSEPPE SARACINO: Culture, Commerce and Tourism travel together -. Unfortunately, Wizz Air, for organizational reasons, suspended flights on the BARI-VILNIUS route, which were strongly desired and solicited by this Consulate, causing inevitable inconvenience to international relationship already undertaken, and with mutual satisfaction between the two Countries. The Consulate continued to take action at 360 degrees, together with several Puglia Airports and Pugliapromozione (the Regional Tourism Agency), to restore a direct flight between the two Countries which, in any case, would also serve the tourist regions of Basilicata and Calabria ”. 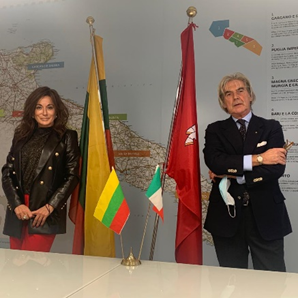 In fact, requests to this effect have come from the Lithuanian Ministry of Foreign Affairs (Tourism section), the Italian/Lithuanian International Chamber of Commerce, Rotary and Lions International Lithuania, the Lithuanian Community of Puglia and Basilicata, as well as from some important Lithuanian tour operators. The Consul SARACINO thanked “Pugliapromozione”, and in particular NANCY DELL’OLIO, Ambassador of Puglia and International Lawyer, for her support in promoting Puglia to Northern Europe, to the Baltic Countries and, in particular, to the Republic of Lithuania: “A decisive help which has led to an incisive increase in tourism from Lithuania, of high standing and with an average stay of five days. We also appreciated “Pugliapromozione” for the assistance offered for the international event to be held in RODI GARGANICO, on 23/24/25 September 2021 to promote the Gargano. In this circumstance, Puglia will benefit from the arrival of about 200 presences (Italian and Lithuanian), including those of tour operators, travel agents and commercial operators “. 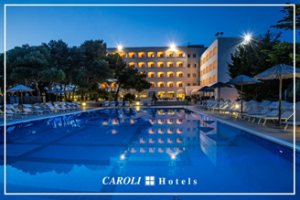 The growth of tourist flows from Lithuania to Puglia has been surprising in recent years thanks also to the activation of the direct BARI-VILNIUS flight, which in 2017 brought over 8,000 tourists to Puglia. Overall, the Tourism Observatory of the Puglia Region reports an increase in arrivals and presences from Lithuania of + 150% from 2015 to 2019, with an average annual positive rate of around 40%. The 63% of arrivals and presences were concentrated in 4 stars-hotels.

The groups of Lithuanian visitors visited some of the most beautiful places of the region Puglia including: GALLIPOLI where they were hosted by the CAROLI family in some of the most evocative hotels. Here, the guests particularly appreciated the structure of “ECORESORT LE SIRENE’”, a village located on the beach, where they could both appreciate the sun and the sea, doing a lot of activities in the open air and visit the Old Town of the city, easily reachable with the minibus service, offered by the structure. As well as, the “JOLI PARK HOTEL” and the “BELLAVISTA CLUB”, two of the most famous hotels of the place: the former located in the city center with the promenade on the crystalline Ionian Sea; the latter housed in a skyscraper overlooking the inlet of the reeds and the new port of GALLIPOLI, with a Panoramic Restaurant, whose breathtaking view was particularly appreciated by guests. Or even “VILLA RELAIS DELLE ROSE” 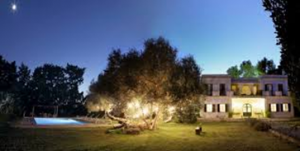 , a property owned by the Past President of Rotary of Lecce, Dr. FRANCESCO MARIANO MARIANO, equipped with a patio overlooking the garden and a terrace, which gave the guests the opportunity to easily reach, even on foot, and visit the greatest places in the city. As soon as CV -19 will permits, Mrs. Dr. INGRIDA KELBAUSKIENE confirmed that next international meeting of the LITHUANIAN ROYAL UNION OF NOBILITY will be held in this place. 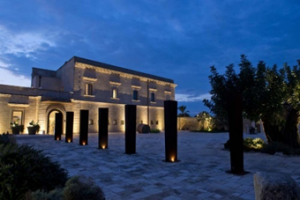 The Lithuanian tourists moved towards the entire region, visiting also the city of TARANTO. On this occasion, the aforementioned were hosted in the wonderful structure of ‘HISTÒ’, also known as ‘SAN PIETRO SUL MAR PICCOLO’, which takes its name from the splendid glimpse of the sea it overlooks. The owner of the structure, Dr. GIOVANNI COLOMBA, welcomed the guests during the visit, telling how he made this wonderful structure, guest of the ancient Masseria di San Pietro in Mutata, dating back to 1392, previously a Roman villa and Monastery, a luxury hotel equipped with every comfort.
Other members of the delegation, instead, preferred the Hotel Europa, owned by the COLOMBA FAMILY. Located in an enchanting position (the plexus dominates the Mar Grande and the Mar Piccolo), the hotel overlooks all the beauties of the city. 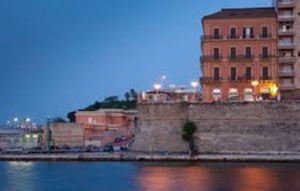 Housed in a neoclassical building, overlooking the ancient port, the HOTEL EUROPA, with its history spanning three centuries, is one of the oldest structures in the village of TARANTO, still retaining its nineteenth-century charm. From here, guests were able to move freely on foot to enjoy the beauty of the city to better appreciate the richness of the historical background of the city itself.
For Lithuanian tourists, the choice of destination is closely related to the factors of marketing and accessibility; in fact, particular attention is given to the level of efficiency of the destination services. Among the most popular products are active holidays (cycling, trekking and hiking) and eno-gastronomic itineraries.

“This is an excellent result obtained thanks to constant public relations work that has brought Puglia to the attention of travelers from Lithuania. An important milestone that rewards the promotional activity which, even in this period marked by the pandemic, has never stopped – comments NANCY DELL’OLIO, Ambassador of Puglia and International Lawyer – Not only the capital VILNIUS, but also other important cities such as KAUNAS,

European Capital of Culture 2022, continue to turn their gaze to the old continent, showing particular attention to our region. Thanks to the twinning in progress between KAUNAS and Apulian institutions, significant flows into and out of Italy/Lithuania are expected, with satisfaction for the new flights. I thank the Consul of Lithuania for Puglia and Basilicata, for having offered his collaboration. Together we agreed on new travel programs in Puglia, such as the inclusion in the travel programs already carried out, of the visit to BARI of the Tomb of Bona Sforza at the Basilica of San Nicola (Queen Consort of Poland and Grand Duchess Consort of Lithuania since 1518, as well as that SOVEREIGN DUCHESS of BARI since 1524). “